How to Day Trade Without $25k 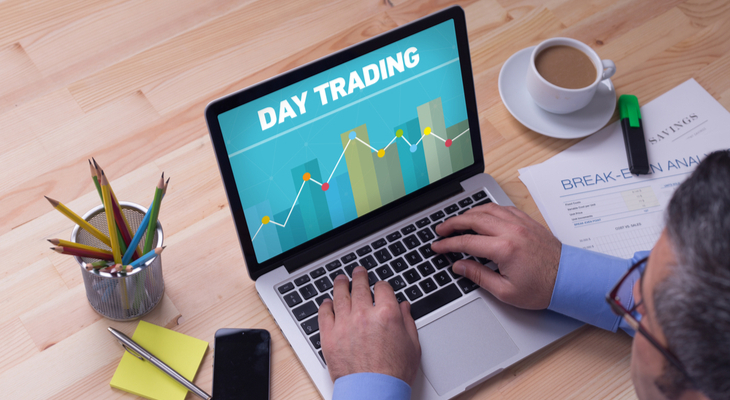 If you want to know how to day trade without $25k then this article is for you. We’ll cover how to get started, ways around the PDT rule and some valuable tips.

The PDT essentially states that traders with less than $25,000 in their margin account cannot make more than three day trades in a rolling five day period. So, if you make three day trades on Monday, you can’t make any more day trades until next Monday rolls around again.

After learning this, many would-be day traders either give up entirely or shift their focus to swing trading or the futures market.

While those are viable options, you can still successfully day trade stocks with less than $25,000 in your trading account, and we’ll go over a few methods throughout this article.

The common approach recommended by many day trading educators is to open multiple brokerage accounts. For each additional brokerage account you open, that’s another three day trades per rolling five-day period.

Unless you’re implementing a scalping strategy, six or nine day trades per week are enough for most traders, so this is a viable option. However, you may end up spreading your cash too thin.

You already have a relatively small pile of money to work with, and splitting it up further may slow down the rate of your gains. You become forced to establish smaller position sizes than you may otherwise have chosen.

I think this approach makes sense for those with account sizes that are approaching being beyond the PDT ($25,000 and up). Anything smaller, and I think you may be spreading yourself too thin.

This does, however, depend heavily on the asset class you trade.

If you trade high-flying penny stocks, your average position size in a $20,000 still might be $1,000 or $2,000 because of the high volatility associated with penny stocks.

One of the key perks of this approach is that the significant discount brokerages now offer commission-free trading.

Commissions used to act as the primary deterrent from opening multiple brokerage accounts because a $10 round trip on a $1,000 trade already puts you 1% in the hole. On a day trade, that makes all of the difference.

I’m always when day traders don’t know that the PDT rule doesn’t apply to cash accounts. That’s right. You can make as many day trades as you wish in a cash account. But there’s a catch. You need to be trading with settled cash.

One of the primary reasons that margin accounts have become the de-facto standard account type in the United States is because of the SEC’s cash settlement rules.

The rules state that basically, when you liquidate a position in your brokerage account, the cash proceeds from that transaction must ‘settle.’ This means that you can’t use the cash for two days after the transaction date.

If you made the trade on Monday, you can’t use that cash again until Thursday.

So if you have a $10,000 account and make a day trade using $4,000 of that cash, you can only trade with $6,000 until the rest settles. You can imagine that day trading like this can quickly become even more prohibitive than dealing with the PDT rule in a margin account.

One area where I think cash accounts shine is with traders who aren’t trying to make income from their trading account.

If you can stick to using quite small position sizes and are approaching day trading as a learning experience, rather than a quick profit opportunity, a cash account becomes an easy way to make several day trades with real money, without worrying about the PDT.

Some brokers aren’t domiciled in the United States, allowing traders to skirt some of the more restrictive securities regulations by using an offshore broker.

Be warned, however, that some of those securities regulations were created to protect you, and on some level, you give up that protection when signing up for an offshore broker. Be aware of all of the risks and pay extra attention to the paperwork you sign!

The two prominent brokers in the offshore broker space right now are Capital Markets Elite Group and TradeZero. These brokers tend to have higher fees than their domestic counterparts, typically charging commissions and subscription fees for their active trading platforms.

There’s also merit to having one margin account where you store all of your trading cash. Of course, you’ll be restricted to three day trades per week, but this restriction can actually serve as a positive for some traders.

It wouldn’t be a ridiculous assumption to make that those with small trading accounts probably don’t have a ton of successful trading experience. Because of this, the PDT can sometimes play in these traders’ favor.

Aside from merely decelerating the rate of their losses, it can also serve as a function of discipline. The PDT can force you only to take the A+ setups, keeping your powder dry until you spot a near-perfect opportunity.

If you only have three day trades per week, it doesn’t make much sense to trade on a super short-term time-frame like a one-minute chart. In doing that, you’re not effectively maximizing the profit potential of each day trade you have.

I think it’s more reasonable to trade on a longer-term intraday chart. If you ask me, at least 30-minutes, sure, trading won’t be as action-packed, and things will move slower, but that’s a good thing!

If you read interviews or writings of wealthy traders in a book like Market Wizards, a recurring theme is that trading should be boring. It would be best if you didn’t use trading as a dopamine machine, but a mechanism that will reward decisions with a positive expected value over a large sample size.

Would you rather gain $3.00 per share or $0.40? If you’re limited to three day trades per week, then maximizing the expectancy per trade should be at the top of your list.

Stick To A+ Setups

This rule should apply to all, but we’re not robots, and we often seek pleasure in favor of following through the smart, disciplined route to profitability. The PDT has a beneficial way of forcing you to stay on the sidelines until you see an A+ setup.

As a trader under the PDT, you should continuously have that a voice in the back of your head, asking, “is this setup strong enough to use one of my day trades on?”

Hopefully, this trading discipline, while under the PDT, will create a positive habit that carries over when the PDT no longer burdens you.

This is one of the most common mistakes I see day traders under the PDT making. They enter a trade, and as the session close approaches, they begin to rationalize why they should hold that trade overnight so they can avoid using a day trade.

I’d say that nine times out of ten, those traders are better off using a day trade and closing the trade.

Sizing Too Big Due to PDT-FOMO

Those burdened by the PDT will often size their trades too largely because they know they only have a few chances to make trades that week, and they want them to really count.

There’s no shortcut around growing your account. Even A+ setups have a high rate of failure, and losing streaks are possible and probable on a long enough time frame. In trying to get beyond the PDT, you might put yourself out of the game completely.

So we covered some great ways to start day trading with less than $25k and some tips for trading smaller accounts.

Day trading can be risky if not approached in the right manner so take your time, learn the basics and start small.

Let us know if you have any questions in the comments below!

How To Get Around The PDT Rule Without

How to Make A Living Day Trading

How Much Money do you Need to Day

Top 5 Best Online Stock Brokers for use in 2021